TOPNEWSACTIVITYTohoku Pacific Earthquake: Report 13 on Medical Activities on the ground

Tohoku Pacific Earthquake: Report 13 on Medical Activities on the ground 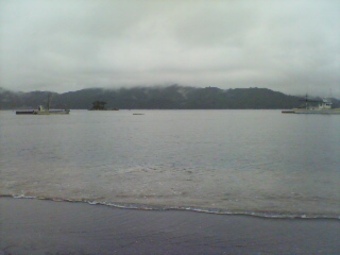 After the O-bon holidays in August, the remaining people staying in evacuation centers moved into temporary housing and other accommodation. All the evacuation centers in Ohtsuchi are now closed.
To be honest, it was strange for me to see this happen. I have spent most of my time here visiting the centers and they had formed the basis of people’s day to day lives since the disaster. Of course, there was nothing ordinary about the evacuation centers for the people living there. The centers were very much not day to day. Their closing made me realize that this was the point at which people were taking their first steps back to a normal life. I wonder how many people have left the centers to return to their own homes and been able to get everything back to normal. I don’t have any exact figures, but I don’t expect there are many.
On a rainy day after the O-bon holidays we went to visit a temporary housing complex a short way off, overlooking the sea. We met an elderly lady there who invited us into her new home, explaining that she lived alone. It was just recently that she has been on her own. Since the 11th of March.
“I went through the war and I experienced the tsunami from the Chilean earthquake, so why do I now have to go through something like this? No matter how much good you do, something bad always happens.”
The tsunami warning siren wasn’t heard in this lady’s neighborhood. Having no idea whether it was better to evacuate or not, her husband sent her on ahead of him just in case. They were never to meet again.
“My son grew up to become such a good person. But you can’t be too good. You should have even just a little bit of bad in you as well…”
Her son was a firefighter, and when he went out to help others during the disaster, he didn’t return home.
“I was born and raised here. I’m even glad that this new, temporary housing was built here”, she said as she looked out over her home area. In this housing complex, perched on the mountainside, there is no hospital, not even a shop nearby.
The stress and psychological strain she had been under finally overwhelmed her two days after moving in to her new home. She felt dizzy and could no longer get up. There is only one bus service every hour and a half which runs to the nearest hospital, so she has been using the small amount of savings she has left to go there by taxi instead.
Even though more than 4 months have passed since the disaster, she cried openly in front of us – people she had just met for the first time.
This lady’s ‘day to day normality’ stopped on the 11th of March.
Then, we heard a voice saying “I’m home!” as the door opened and her grandchild, who lives next door, came in from elementary school. We see the lady smile for the first time. She was reunited with her daughter and grandson a few days after the earthquake and tsunami struck.
I hope that leaving the evacuation shelter and starting their lives again will be the beginning of a return to normality for them, and that they will remain close to one another in their new homes. I have a feeling they will.