TOPNEWSACTIVITYTohoku Pacific Earthquake: Report 18 on Medical Activities on the ground

Tohoku Pacific Earthquake: Report 18 on Medical Activities on the ground 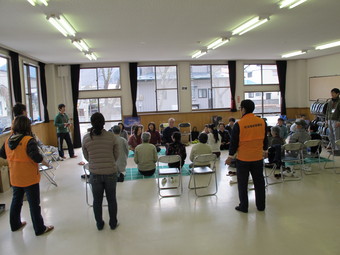 The town of Ohtsuchi was changed completely by the tsunami.
Even if some people were fortunate enough not to lose their homes, there are no shops left standing for them to buy groceries at. Familiar sights are gone forever. It’s fair to say that no resident of Ohtsuchi has been left untouched by such changes in their living environment.

I hear of people who fled their houses because they were no longer safe to live in and went to evacuation centres, but who then returned to live on the 2nd floor which was untouched by the tsunami because they couldn’t adapt to life in the centre. I also hear of people who were not directly affected by the tsunami suffering under the burden of offering living space in their homes and supplies to affected relatives, or trying to support relatives who moved into the temporary housing.

As the medical team and exercise team carry out their work, they catch glimpses of locals struggling to adapt to these kinds of changes in their lives.

This report was written by a nurse who has been involved with the work in Ohtsuchi from when evacuation shelters were open to the present.

———————————————————–
The town of Ohtsuchi and its surroundings in Iwate Prefecture are now in the depths of winter. Days when the plumbing and even the water in the toilets of temporary housing freeze because of the numbing cold are not rare.
Houses built to withstand such weather may not have such problems, but the contractors who built the temporary housing here are being criticised for not building them to the correct specification. And it’s not just the temporary housing. Some victims of the tsunami are managing to scrape by through living in their former homes, which are now only just inhabitable. Such individuals are referred to as ‘home-based refugees’. Many of them are wrestling with keeping out the bitter cold due to inadequate insulation.
Our medical team is just one part of the emotional and psychological care team, which is offering a special course on “Sleeping Tips” in collaboration with the Ohtsuchi Social Welfare Council. Victims’ emotional states cannot be separated from the problem of insomnia that many of them are facing, so we teach them about this and provide them with the know-how to deal with it. However, both emotional and physical causes of concern are now beginning to surface among home-based refugees.

Although it’s still far from adequate, support is now becoming available both publically and privately. Compared to the temporary housing neighbourhoods where community support workers were introduced from February to manage the meeting halls, the government still hasn’t grasped the support needs of home-based refugees. So it’s not the case that support will be provided if only they wait, rather it seems that there are cases where they want to ask for support but hold back, because of the perceived greater needs of those who are in temporary housing.

A few days ago, a doctor who was visiting the disaster area for the first time and learning about our activities there said the following – “It’s no good waiting until the day when you will be able to provide medical assistance in a hospital, is it? You just have to find a way forward by yourself.” I knew exactly what he meant, and resolved to stay involved with relief activities from here on, too.