Already declining before the start of the conflict, Yemen’s health system has collapsed: more than half of the health infrastructure are estimated to be destroyed, and more than 22 million people are in need of humanitarian assistance, out of an estimated population of 29 million. In the South as in the North, access to care is very difficult for the population. Many health structures no longer work. Those still open often lack essential equipment, drugs, fuel, or they are located in too dangerous areas. 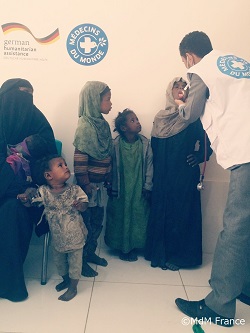 The Houthis and the Yemeni government have battled on and off since 2004, but much of the fighting was confined to the Houthis’ stronghold, northern Yemen’s impoverished Saada province. In September 2014, the Houthis took control of Yemen’s capital, Sanna, and proceeded to push southwards towards the country’s second-biggest city, Aden. In response to the Houthis’ advances, a coalition of Arab states launched a military campaign in 2015 to defeat the Houthis and restore Yemen’s government.

On June 13th 2018, The Saudi-led coalition launched a military campaign in the West coast to retake Hodeida city, with Emirati troops leading the operations with the backup of different forces.

Consultations between the Houthis and the internationally recognized government aimed at reviving peace talks collapsed on September 7th, when the Houthis, citing the coalition’s failure to provide safe passage to the delegation, declined to join the talks. Immediately afterwards, the Saudi-led coalition forces resumed military operations around Hodeida city. Airstrikes continued throughout August-October. 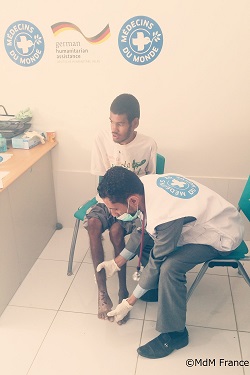 In the past few weeks, we have been witnessing a change in the “unconditional” support of Saudi allies, following the murder of the well-known journalist Jamal Khashoggi on October 2nd. Indeed, the contradiction and lies of the Kingdom to provide explanations have triggered a raising international pressure for a “credible investigation”. This murder has seriously tarnished the reputation of Mohamed Ben Salman, and by extension, the conflict in Yemen was more covered by the media.

In this context, it became more and more difficult for Saudi allies to remain silent and resume of peace talks was openly requested to end as soon as possible this military intervention. Several positive signs can be observed such as partial ceasefire in Hodeida and 50 wounded Houthi fighters evacuated to Oman for medical treatment as part of a package of confidence-building measures. These events have led to the announcement of new Yemen peace talks set up by the UN that will likely take place in early December in Sweden. 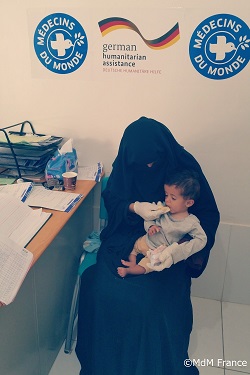 Already declining before the start of the conflict, Yemen’s health system has collapsed: more than half of the health infrastructure are estimated to be destroyed, and more than 22 million people are in need of humanitarian assistance, out of an estimated population of 29 million. In the South as in the North, access to care is very difficult for the population. Many health structures no longer work. Those still open often lack essential equipment, drugs, fuel, or they are located in too dangerous areas.

Yemen could be facing the worst famine in 100 years if airstrikes by the Saudi-led coalition are not halted, the UN has warned. If war continues, famine could engulf the country in the next three months, with 12 to 13 million civilians at risk of starvation.

Furthermore, the alert on a new third wave of cholera outbreak declared by WHO/MOH in May 2018, is still active and MdM continues to work in close collaboration with other partners on the ground for response preparedness.

Since 2015, Médecinsdu Monde(MdM) has been operating in northern Yemen controlled by the Houthis by supporting 11 health facilities in Sana’a, Ibb and Amanat Alasimah governorates. Our teams are currently backing up the Ministry of Health by providing primary healthcare services so that populations can have access to: curative consultations, pre and postnatal consultations, routine immunization, nutritional care, health education, psychosocial support and individual counselling for mental health. We are also working to train health staff and volunteers in communities. MDM is also working to improve the referral to the specialized functional structures of the most urgent cases.


“The demise of Hazim’s uncle ,three months ago, had effected my son so badly to the level that we believed he’d lost his mind or is epileptic.

After his uncle’s death, Hazim became extremely violent towards everyone, suffered from sleep panics and lost his appetite. It’s only when we visited MdM at our village’s PHCC (at A’amad, Yareem district) and met its mental health and psychosocial team, we understand that Hazim had only a conversion disorder. Hazim received less than 6 sessions and now back to normal.

MdM had not only make Hazim normal, but provided beyond that, it has made us extremely happy.”


“Without MdM’s support in the Mother and Child Center in Ghabash, we could have dead!.
I was in my ninth month of pregnancy where I had bleeding.
We had a similar case in our village before MdM came where the pregnant girl died, I was scared that I will end like her.

Then I was admitted to the Mother and Child Center and was advised to a have Caesarean operation. MdM’s doctors and their referral system transported me to Al Er Rural Hospital where I had my operation there and gave birth to a healthy baby born. I was discharged after one week.
May Allah reward MdM.”

The cost used to be over 25,000 YER but now, may Allah protect those who helped and provided in the provision of these drugs.”