In the camp where more than 700,000 Rohingya people are evacuated, measures for cyclone, rainy season and monsoon have been promoted since last year. Therefore, the ground is hardened to a certain extent in the area where the shelters are built, but landslides have occurred along unmanaged roads. Last week, Rohingya volunteers were also working on removing the broken soil. There are also areas where the bodies of some who died are buried, the effects of the weather in the near future is worrisome. 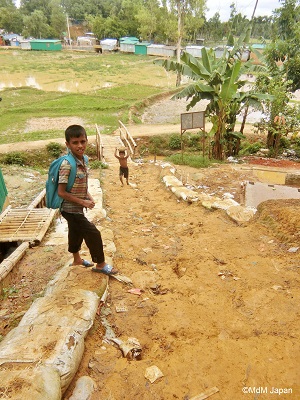 There are dirt stairs on the sidewalks where there are height differences in the camp, but here the overly moist soil is very slippery and hazardous.
The mud added to piles of rubbish makes hygiene even worse than it was.
It is expected that 1,000 mm of rain will rain from July 5th to 10th due to the influence of the monsoon.

In addition, the road from the town of Cox’s Bazar to the camp is also affected by the disaster, and it is a daily challenge for us to reach the camp.
As the roads we have used so far are under construction, the support groups now head to the camps using the two main routes. One is a route that runs along the beach where it is easy for cars to get soaked. On the other one, work clutters the road in various places, furthermore, there are many flooded places along the road due to rain. It is difficult for support groups to go to the camp.

MdM has been active around the Kutupalong camp since 2017. We conduct health, hygiene and disaster prevention education mainly on disaster response: vaccination, immunizations, prevention and response to infections, treatment of injuries requiring first aid, family planning and safe pregnancy and delivery, community workers called mobilizer (team made of Rohingya and Bangladeshi) play a vital role in our communication and in the implementation of assistance with the beneficiaries.

In the long-term evacuation period of three years from the large-scale evacuation in August 2017, each resident raises awareness on health, hygiene and disaster prevention that leads to action in the community. Believing that resiliency will be strengthened, it will lead not only to the improvement of living conditions but also to the mental and physical health of the Rohingya people, thus we are continuing our activities.