The unprecedented, multi-faceted disaster that struck the Tohoku region on March 11th 2011 took many lives, destroyed people’s ways of life and caused extensive damage.
Médecins du Monde Japon（MdM Japan） started assessing the situation immediately after the disaster and dispatched a medical team composed of psychiatrists, nurses, clinical psychologists and logistics specialists to the affected area. In addition to basic medical aid, DoW provided psychological support at evacuation centres, temporary housing sites, individual homes and hospitals in the affected area. Starting in April 2011, the “Nicocoro Project” and “Iwate Prefecture Medical Systems Restoration Project” were carried out for three and a half years in the town of Otsuchi in Iwate Prefecture. 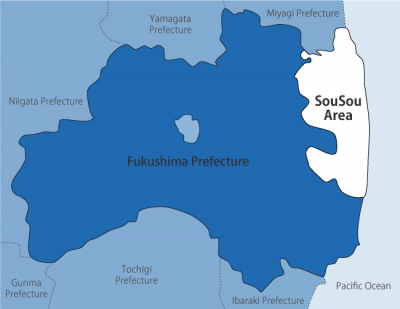 The SouSou district (composed of Minami Soma City, Soma City and Futaba District) was affected by the triple disaster (earthquake, tsunami and nuclear accident). As hospitals and pharmacies were shutting down, this resulted in the breakdown of medical care in the area. In addition, psychiatric care in all hospitals and clinics were suspended or abandoned entirely.
The NPO ‘Nagomi’ (Citizens Group to provide a new Psychiatric Care and Welfare System for SouSou) was formed in November 2011 under the direction of Fukushima Prefectural Medical Hospital’s psychological care team. Its aim was to offer support to patients in need of continuous treatment who were directly affected by the crisis and therefore in need of psychological care. Nagomi then launched the Fukushima SouSou Project in February 2012 to close the gap in the provision of psychiatric care that existed at that time.
MdM Japan worked with them on the project as a partner organization, dispatching specialists such as psychiatrists and providing medical equipment. 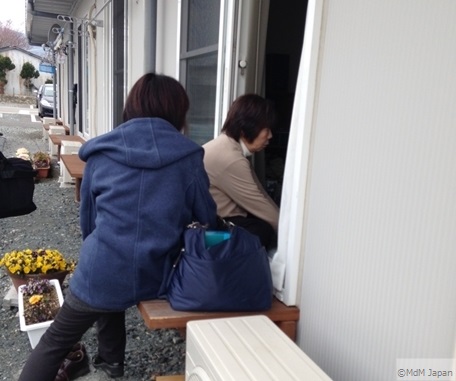 After the disaster, feelings of loneliness, isolation and sadness had a large effect on victims of the disaster by causing psychological damage and stress. Such feelings affect both young and old in ways that are visible and not visible, both mentally and physically. The SouSou district of Fukushima Prefecture experienced the unprecedented crisis of a nuclear accident – something that had never before been experienced in Japan. No one was able to look positively towards the future and it felt like the beginning of an unending period of hardship. There was a need for psychological support, including among aid workers, which led to the start of the emotional care activities in partnership with Nagomi that offered long term support.
As time went on, new challenges started to rise in addition to the preexisting ones, which resulted in further complications of the situation being faced by the victims. Six year on, various factors are compounding the situation such as rapid aging of the local population, loss of employment and roles, and the fracturing of families. When people do return, they end up living in temporary housing instead of their former homes. This change in their environment can have a variety of consequences, such as the breakdown of communities, tension among those who received compensation and those who did not, a drop in people’s ability to look out for one another, psychological impact on children, bullying, etc.
The mental healthcare provided by MdM Japan is not only about the benefits of treatments and related activities, but also about making the victims’ suffering visible, to bear witness and spread information on the current situation and to continue conveying information about this problem to the general public so that it is not forgotten.


MdM Japan is involved in a variety of different activities, such as the dispatch of psychiatrists, nurses and clinical psychologists to salon activities and outreach activities, counselling aimed at mothers and children, counselling in elementary and junior high schools, advisory activities for teachers and staff, and provision of lectures.
Understanding the needs of the residents, listening to them, making connections and respecting every individual’s time and the choices they make, are values shared among all the medical volunteers involved in these activities.
We are committed to continue providing support that matches the needs of the district, addressing both the need for psychological support that existed before the disaster and the psychological support that became necessary after the disaster struck. It is also hoped that offering this support will help restore community ties and bring the district together.

*A greater part of this program is funded by the “Tomo ni Ikiru ” Fund of Japan Platform.


Recommendation from Support Projects in the Areas Afflicted by the Great East Japan Earthquake: “KoKoRo of FUKUSHIMA”


Mental health care centered on knowing the needs of the residents, listening to the voices, making connections, respecting each individual’s choice and time, now three recommendations will be sent here to lead the creation of new local community that brought by the resilience of the people of Fukushima and the support of the administration.

↑You can download or view the digital booklet by clicking the above: