(14 March 2018) This year 15 March marks seven years of war in Syria: the parties to the conflict, together with their allies, are killing with complete impunity, while the international community flounders impotently.
So much has already been said about the scale of the conflict: 350,000 deaths, a country bled dry and over half the Syrian population in exile or internally displaced.

Médecins du Monde – Doctors of the World (MdM) is calling on the international community to assume its responsibilities: to do everything possible to ensure access to humanitarian aid and to take action to end seven years of war crimes. A stop must be put to the impunity.

“For seven years, access to healthcare has been used as a weapon of war. Destroying hospitals just as the bombings drive civilians to these places where they should find refuge and receive care is an assault on the physical integrity of the population and shows that the attacks will spare nothing and no one, not even children. In the last three weeks, 1,000 people have died in Eastern Ghouta, and one-hird of them were children,” says Dr Françoise Sivignon, President of MdM.

“During this conflict, medical staff have been decimated; medical centres have been attacked almost systematically.”

11.3 million Syrians – the largest number of refugees since the Second World War – are in need of medical assistance and are subsisting in the most difficult conditions. United Nations Security Council resolutions are passed one after another and are violated as soon as they are adopted. The supposed de-escalation zones established by the Astana Agreement only exist on paper, as this war demonstrates the failure of an international system which has run out of steam.

MdM rejects the prevailing fatalism, demanding once again that a political solution should be prioritised and calling for the establishment of an international peace-keeping force to disarm the warring parties.

Dr Françoise Sivignon adds: “Seeking a solution to the conflict through diplomacy should enable a political resolution of this war, which has gone on for far too long. France can bring all its weight to bear on the development of economic sanctions against Russia or any other means of exerting pressure, such as boycotts.”

The mobilisation of Syrian civil society, which has proved solidarity and mutual aid since the start of the conflict, is crucial. It must be involved, together with States and inter-governmental organisations, in achieving reconciliation and a just peace.
Finally, MdM demands that humanitarian truces are properly observed, to allow aid teams to respond to the most pressing health needs of the civilian population resulting from the escalation of violence, and calls for an end to impunity.

We will not stand by as Syria is destroyed
Today, Doctors of the World teams from around the world united in public protest at the continued targeting of civilians in #Syria and to demand their protection. 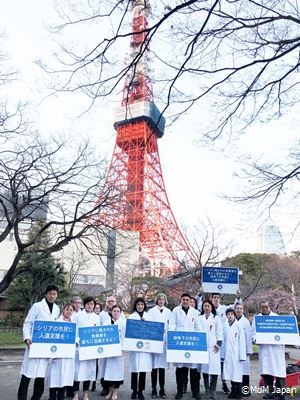