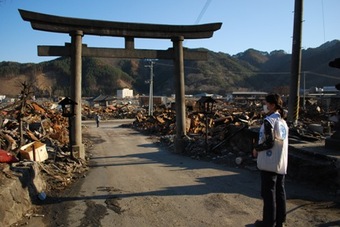 A team of 8 medical Doctors of the World staff made up of psychiatrists, nurses and relaxation therapy experts specializing in emotional and psychological care has been visiting refuge shelters and private homes in Ohtsuchi, Iwate Prefecture.

Ohtsuchi is a port town of roughly 15000 people that neighbors Kamaishi. The downtown district in which the population is concentrated developed along the coast and suffered catastrophic damage as a result of the tsunami, which reached as far as 8 kilometers inland. Mountains of rubble still line the roads that have been cleared to allow vehicles to get through and there are buildings that only just managed to remain intact, but will not be fit for use again.

To date (8th April) 577 people have been confirmed dead. The very people who should have been involved in the town\’s recovery – local government employees, including the mayor who had previously chaired earthquake disaster countermeasure meetings in the town hall – were among the many who lost their lives. Those employees that remain are dealing with a mountain of challenges and situations that change by the minute. Quite literally, they are going without a moments rest or sleep. Close to 9000 people are seeking shelter in the homes of family members, friends, and between 40 and 50 refuge centers.

Doctors of the World is liaising closely with the Mental Health and Welfare Center in Iwate Prefecture. We hold meetings every evening with the disaster medical care headquarters in Kamaishi and every morning with health outreach teams, doing everything we can to support health care across the region.

Four weeks on from the disaster, lending an ear and simply listening, massage and relaxation exercises to help relax the body are also important aspects of emotional and psychological care in addition to counseling surgeries and medical examinations by psychiatrists. Our contact with the victims begins with speaking to them in a non-invasive manner and listening quietly to whatever they want to talk about. Despite complaining of anxiety about the future that they cannot yet begin to see, we still hear many saying \’I\’m not the only one with problems\’, \’there are others worse off than me\’. As human beings it is only natural for victims to feel as if their hearts have been utterly crushed by the continuing fear of aftershocks, anxiety about rebuilding their lives and dealing with the loss of loved ones. That is why, now, we are supporting them by doing all we can to make sure these wounds do not get worse.

On the long, long road to recovery ahead , the Doctors of the World emotional and psychological care team will support the victims and others who are giving their all to care for them, building a new future for the disaster zone together.