TOPNEWSACTIVITYTohoku Pacific Earthquake: Report 4 on Medical Activities on the ground

Tohoku Pacific Earthquake: Report 4 on Medical Activities on the ground 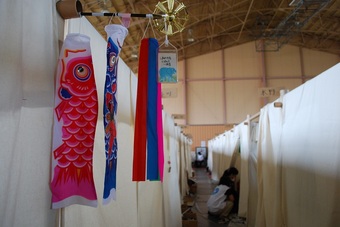 In a recent visit to an evacuation site, I had a particularly memorable encounter with a child.

She appeared to be around ten years old and was spending her time in a very small corner of the evacuation center where she could watch DVDs and play video games. She was alone and away from where the other children were playing. I was curious and tried to talk to her. She was had just put on a DVD and asked me if I wanted to watch it with her.

From speaking with her, I could see that she was a very friendly little girl, and although she kept apart from the other children, she did not seem to be purposely isolating herself.

One of the trailers before the movie showed a scene with a body laid out in a coffin. “That’s scary. I’ve seen a lot of people like that,” she muttered.

Afterward, she talked and laughed as she watched the movie, but I didn’t quite know how to talk to this little girl who had seen so much death in her short life.

The weather had grown gradually warmer and it was a fine day, but I was deeply affected by the stark contrast between the sun’s radiant warmth and the heavy sadness in the hearts of the people in the shelter.

Awhile later, the girl asked me if I wanted to meet her friends. We went out to the main yard, where Japan’s Self-defense Forces had gathered together toys in celebration of Children’s Day, a national holiday here. She introduced me to the other children at the site one-by-one then took me to meet a member of the Self-defense Forces. She hugged him and told me his name. He nodded shyly, and I could see that they really were friends.

The earthquake had dramatically changed this little girl’s life: she had been transplanted to an evacuation shelter with Self-defense Forces and the constant coming and going of defense vehicles. It perhaps symbolized the scope of the disaster in some ways. Still, I felt that the children were making sense of this grim symbolism on their own.

Nearly two months have passed since the earthquake struck, and many children have not come to grips with the tragedy. Often they are unable to accept the reality of what has happened and are in denial. I believe that children are inherently strong and that we should try to learn from them to better understand what kind of support adults can provide to those who need help. I hope that future relief work will take into account children’s opinions on what kinds of help they need and–just as importantly–don’t need.