TOPNEWSACTIVITYTohoku Pacific Earthquake: Report 5 on Medical Activities on the ground

Tohoku Pacific Earthquake: Report 5 on Medical Activities on the ground 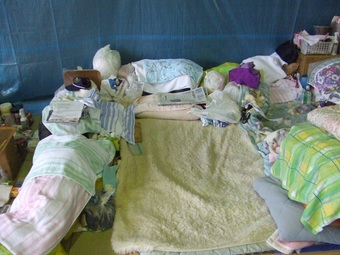 One month and a half after the terrible tsunami that hit the Eastern coast of Japan, on a cold day of the end of April, I took part for one day to the activities led by Doctors of the World medical team in Iwate Prefecture.

I left Tokyo on April 25 at 11pm in a confortable night bus. After 8 hours of travel (and good sleep), I arrived in the city of Kamaishi, deeply affected by the tsunami. After waiting for a while for a taxi (many of them were swallowed by the wave), I finally got one and headed to the building where medical and social care teams working in the areas meet every morning under the supervision of the authorities of Iwate Prefecture. There, about 40 medical staff coming from all over the country, from Okinawa to Hokkaido, were gathered to share precious information on the risks of infectious diseases, the arrival of new care teams, the number of people seen in consultation, etc. Doctors, nurses, social care specialists from various regions and belonging to different organizations, but still working in harmony towards the same end in a very organized and professional way: I found the Japanese way at work the moment I arrived in Iwate.

Jumping into one of the cars generously lent by our sponsors, I joined our 3-members team for the first ride of the day. Dr Daichi Morioka, surgeon and experienced aid worker, is the coordinator of our emergency project in East Japan. Dr Suimei Morikawa, psychiatrist in charge of our medical aid project for homeless people in Tokyo, is the main referent for this project focused on mental healthcare. Mifuyu Akasaki is a nurse who volunteered for this mission before leaving with Jica to Burkina Faso at the end of the year. We headed to one of the 20 shelters of the city of Otsuchi where Doctors of the World is responsible for mental healthcare consultations. Although I had seen many pictures of the life in shelters, I was shocked by the promiscuity and the lack of privacy that so many people have had to suffer from since March 11. No wall or partition between families, a tiny space of maybe 4m2 for each of them, a very limited amount of personal items…Signs stating “Women and children, don’t go to the bathroom alone”. The distress of people who have lost everything, house, job, personal belongings, administrative papers, and sometimes relatives and friends, forced to live for days, weeks, months, under the eyes of other people in distress, is hard to imagine. Still, few people complain. Many say they have gotten used to this life. They had to, surely. But while many aid organizations are narrowing their activities, or even leaving the city following the decrease of the number of people staying in shelters, survivors will have to cope with a new feeling of loneliness and dereliction. That is when the work done by Doctors of the World medical team will be the most useful, and that is why we need to be working in the long run to support mentally those who survived the tsunami.

In Otsuchi alone, 1700 persons are dead or missing. Lists of names of dead people are hung on boards in public places. Other boards are left for people to place messages: “Looking for my grand-mother…”, “Does anyone have news about the Suzuki family…?”. Few people were physically hurt. If they were caught by the tsunami, they are dead. Today, the deepest scars left on the survivors are psychological. Youth, elders, men, women, everybody is equal in suffering. But it takes time and the mutual trust allowed by the slow building of true relationships to understand the depth of the wounds left on those who experienced the tsunami first-hand.

Thanks to the commitment of our volunteers, who offered to devote several weeks of their life to alleviate the suffering of others, Doctors of the World has been working for one month in Otsuchi. Our contribution is small compared to the scale of the disaster and the number of victims. But we believe it is worthwile for the thousands of people we are in contact with. And we hope we will have the means to continue answering the psychological needs of the people of East Japan as long as it will be necessary.