TOPNEWSACTIVITYTohoku Pacific Earthquake: Report 7 on Medical Activities on the ground

Tohoku Pacific Earthquake: Report 7 on Medical Activities on the ground 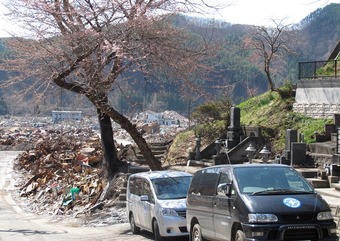 It is almost 3 months now since the disaster. We first arrived in the area on the 3rd of April so as of today (3rd of June) we have been here for exactly 2 months. The town and the people are slowly showing signs of improvement. Thanks to the enormous efforts of the self defense forces the rubble that covered the streets has been cleared and separated into piles of wood, steel and so on. Many of the badly damaged houses that are no longer safe for dwelling have also been torn down. The scores of local volunteers who covered their own travel costs and worked without pay have helped clean up the first floors of many houses which were damaged by flooding, enabling the victims of the damage who were living on their second floors to live downstairs again. The sakura were also overwhelmed by the floods, but their tenacity meant that at the beginning of May they burst into flower and then shed their blossoms as they would any other year. We can see the deep green of the mountains intensify with each passing day. As we go around the evacuation shelters and local homes providing care, these are the small changes in the town that we can see.

As the town changes, we have noticed that the ‘hearts’ of the people are slowly changing too.
“She really was such a beautiful bride…” cries a mother, remembering her eldest son’s wife who lost her life.
“All our neighbors were washed away…so things could have been worse for us. We lost our home, but all of us are safe”
Initially, almost everything we heard after the disaster from survivors was stories of lost family members, friends, homes and property.

“When our father was still here my brother was so gentle, but after we heard that Dad had died in the disaster, he became so angry and took it out on us. I couldn’t bear to watch it, which is why it’s easier for me to be here”, recounted the deputy leader of an evacuation shelter.

Now, we are seeing a shift in focus away from the things that have been lost to the things that are still here, such as previous illnesses, family feuds, the stress of living in evacuation centers and so on. In a sense, this can be taken as a sign that the victims are starting to look forward to the future.

It is not just the town or the local people who are changing. We are starting to change, too. Along with the reopening of the Prefectural Ohtsuchi Hospital and local health clinics, most medical teams apart from the Japanese Red Cross and Aomori Prefecture Medical Association have taken over the care of patients and left the area. Evacuation centers which up until now have received outreach visits by a medical team three times a week will now only be visited once a week, and centers which only had one outreach visit a week will no longer be visited. Medication which was delivered directly to victims up until now will be available at local pharmacies from June onward. The special provision of free prescriptions for people who lost their health insurance cards in the disaster will draw to a close at the end of June, meaning that from July on people will go to their local doctors from prescriptions as normal.

The Iwate Prefecture Mental Health and Welfare Center, Kamaishi Health Center which have been providing mental health care along with other prefectural and municipal bodies will gradually begin to reduce the scale of their operations and be restructured in July. Doctors of the World has now become responsible for all the outreach work going on. Most of the temporary housing developments will be completed during June, meaning that 1000 houses are expected to be ready for occupants. There is the fear that unlike in the evacuation centers, the amount of alcohol being consumed and feelings of loneliness and isolation will increase.

Even though the sakura trees were completely submerged by the flood waters of the tsunami, they still blossomed as if nothing had happened. This has given a strong message to the people here. They must slowly return to normal life and a normal state of mental well being, but there still remains so much that they cannot solve on their own. It is with a firm desire to see them get back on their feet that I continue to provide care for them even just a little bit longer, driving from one evacuation center to another, with their medical charts on my lap.