TOPNEWSACTIVITYTohoku Pacific Earthquake: Report 12 on Medical Activities on the ground

Tohoku Pacific Earthquake: Report 12 on Medical Activities on the ground 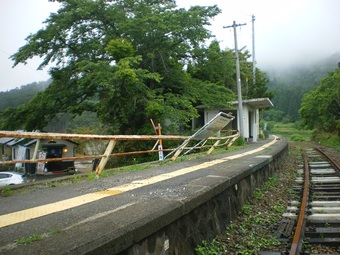 Four months after the earthquake, 47% of all the rubble has been cleared in Iwate Prefecture. As you can imagine from that figure, there is a tremendous change in the scenery here. I notice as I travel to Ohtsuchi after a meeting in the Kamaishi Health Center that the potholes have all been filled in and replaced by a nice, new road. Roads previously blocked by rubble have been opened again. Some sections of road are now so well repaired that the surface looks like calm water covering a rice field. There have been great changes in the people as well as the scenery. At the beginning of June, only a handful of people remained in the evacuation shelters. During the day, people were out and about, reclaiming their lives and getting on with daily business – clearing up the coastline, returning to their homes to clean them, looking for work.

Every day as I talk briefly with people in the health clinics, evacuation centers, around town, I am amazed by their purity, dignity, passion and humor. Each and every one that I have spoken with has left a strong impression on me, but I would like to introduce a few of them to you.

There is a patisserie close to a station on the JR Yamada line – an island among the bare foundations of homes that were washed away by the tsunami. Most of the rubble has been cleared now and not just locals, but volunteers, too, come here to buy things, including, in the case of the volunteers, souvenirs. There is also a small eat-in area where people come to take a break. We have been there several times. There is absolutely no compromise with the atmosphere or the taste. It’s a wonderful place. One day as I was looking at all the cakes and desserts on display, a local woman smiled and told me that all of them were delicious. She told me how she had come to the shop to buy some of its original toasted desserts to send to someone she knew who had given her aid supplies to say thank you for their help. She bought 30. She was truly full of gratitude for the help she had received.

When I had the opportunity to talk with the chief of Ohtsuchi Hospital, he took time to show me around despite the fact that everyone was so busy at the time with preparing to move to the new hospital building. He told me what the hospital had been like before the disaster, and of how all the patients that had been there when the earthquake and tsunami struck were evacuated to the top floor, where they all spent the night. He also told me of how the military personnel came and helped evacuate patients to other hospitals, and how the hospital staff worked around the clock without going home. Hearing all this and more from the chief doctor and other staff, perhaps the levels of trust they have for one another and the way in which they overcame this experience together has helped to form greater bonds between them.

“Where have you come from? Thanks for all your hard work.” These were the words we heard from a man in his 60s one night at around 8pm when we were arranging medical charts in the car park outside an evacuation center. He was a fisherman who had been repairing his nets and was returning to the shelter after sharing dinner with his friends at their home. He went on, “Do you find it hard to know what to say? People here love to talk, so don’t be shy. Talk to them as much as you like!!”

As I was talking to a member of another medical team, a woman gently pulled on my shirt. With delight she showed me the collection of autographs that she got from all the celebrities who had visited after the disaster. “I got this one from singer so-and-so when they visited such-and-such, and this one I got…”

The heroes and heroines of Tohoku are incredibly charming people. The local civil servants who survived the disaster work hard, writing important documents and doing other important work in the less than ideal conditions of the makeshift town hall. The various leaders at the evacuation centers coordinate the volunteers that have come from outside to help, and address visitors. They are holding on and remaining strong – the firemen, the policemen, the teachers, everyone from the elementary school children to the elderly. Each of them is looking for the best way to carry on. There is no one answer and no one is perfect at it.

I felt that I wanted them to make more use of the help from outside and to let us help them more. But what people who have come to help can do is to work with the locals, and back them up. This is not just a matter of delivering aid supplies. All of them are the main characters in this narrative, and all of them go about their days carrying so much inside them. I felt that a specific kind of aid was needed, the kind of order-made service that Japan is so good at making.

Finally, I would like to introduce a photographer who lives in Morioka, Iwate. He has been spending time with the people of Ohtsuchi and doing photography as part of his poster project, ‘A Beacon of Rebirth.’ Every person in the posters is amazing.