TOPNEWSACTIVITYTohoku Pacific Earthquake: Report 15 on Medical Activities on the ground

Tohoku Pacific Earthquake: Report 15 on Medical Activities on the ground 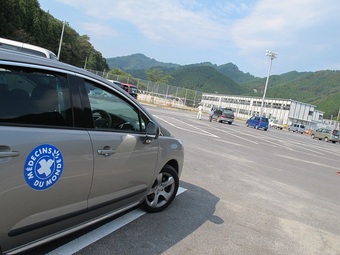 You could say that 2012 was warmer than usual, but it is now getting colder and colder by the day. It pains me to think about how cold seeing through the winter in the makeshift housing will be. It pains me even more to think of how those who have lost not only their homes but also those that up until this year they would have seen through the winter with. As they venture outside less due to the cold and snow, it’s easy to imagine who isolated and lonely people may begin to feel.

One sunny autumn day, I went to visit the home of someone who is working hard for the community of residents in makeshift housing, even though he himself has plenty to worry about and is having difficult sleeping. He is the deputy representative of the neighbourhood and is just getting ready for an evacuation training exercise.

“Everyone is shut up indoors in their own homes and don’t come out. So we have to do something in order to get them to venture out, like sounding the evacuation alarm without informing them in advance. I doubt if anything less will get them to come outside.”

I could tell from talking to him how passionately concerned he was for the members of the community.

“If you shut yourself away, you become both physically and psychologically weaker.” When Medecins du Monde heard this, it decided that we should dispatch the ‘Exercise Therapy Team’ again, which had been in Tohoku until June. This was done not just to help prevent people from losing their levels of physical fitness, but also to alleviate stress and help people unwind. We have already seen plenty of proof that this has a hugely positive effect.

The Emotional and Psychological Care Team isn’t made up of just psychiatrists. Whether medical treatment, exercise or any other method – we will use all possible means available to continue offering emotional support.

ï¼We need some form of transport in order to be able to deliver this care to the various locations in Ohtsuchi, and we would like to take this opportunity to express our heartfelt thanks to Peugeot Citroen Japon for the loan of their vehicle in order to do this.

We are also grateful for the support of many others, which is enabling us to continue our activities.
Once again thank you to everyone for your support. It is deeply appreciatedï¼

To learn more about the activities of the Exercise Therapy Team, follow the link below Tohoku Pacific Earthquake Report 10