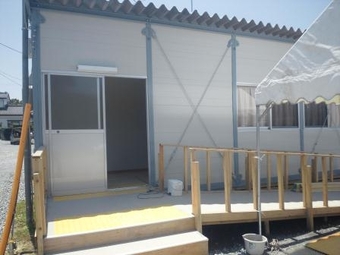 The “Fukushima Sou-Sou project” is launched at the region of Sou-Sou district (including Minami-Soma city, Soma city, and Shinchi-machi ), the place which is damaged a lot of houses by massive tsunami waves and officially designated as evacuation zone due to the massive tsunami attack and therewith the horrific accident in Fukushima No.1 nuclear power plant. A number of residents in this area are still forced to live in provisional housings. At the present time of 9th April, in 2012, 2,675 of such housings can be found in Minami-Soma city, 1,505 in Soma city, and 573 in Shinchi-machi.

MdM Japan support to work for the local mental care project activity named “Mental-health Care Center NAGOMI in grand Soma district”, that volunteers workers visit residents of the area, and provide preventive health care advices. In this article, a daily report by a nurse participating this MdM’s project since this March, will be presented.

Today, I visited the meeting held at a provisional housing named “Gankoya”, in Shinchi-machi.
This meeting of “The Circle, Let’s have a little break here” is opened in gathering space among the provisional housings on a regular basis. The volunteers workers and the residents have a small tea-party there, and share the experience and various feeling given by each participant.

Today, several people were talking about graphic images on what happened on 11, March last year. I assume this was because this month is just marking the first anniversary of that tragic incident. People still remember vividly about the disaster, however each one’s pace for rebuilding their life is varied now. Comparing themselves to others, some of them are feeling anxiety and alienation, as if only he/she is left behind the speeding up stream toward reconstruction.

I strongly felt the importance of focusing on such people and advising them not to feel pressed, and tell them they can keep their own pace, even if it was slow step by step.
It has been about half an year since people moved into the current housing “Gangoya”, “Gankoya” however the local community has not been yet established. I was quite surprised by this situation. It might be because they are originally from different district. Therefore, this society circle will need to further grow into the community space which fosters solidarity between those living in the provisional housings.

On the way back to home, I was stopped by one of the participants.

“I remember you. You’re the one coming to our place, aren’t you?”

From his word, I realized this Mental-helth Care Center activity project has gradually taken the root in the local community. This project might be a part of motional support to the residents. I can see it from the fact that a number of people are repeatedly gathering at the meeting, while some of them are not urgently requesting medical support. They will be content meeting project volunteers workers continuously coming for them.