TOPNEWSACTIVITYthe 21th Report of Medical Volunteer The wind through Ohtsuchi-cho became colder with arrival of December.

the 21th Report of Medical Volunteer The wind through Ohtsuchi-cho became colder with arrival of December. 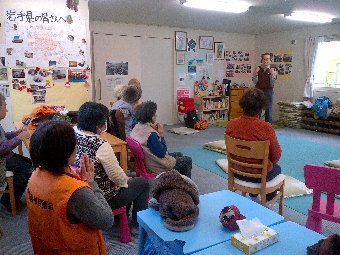 We, medical team of kokoro-no-care team, make lectures about “Tips (in Japanese ‘Tsubo’) for better health status” going around community halls with LSAs of Ohtsuchi Social Welfare Council. Normally, people would think such lectures are not relevant to mental health, but we think the most important thing to keep good mental condition is to care your body. In the lecture, a psychiatrist who is also a professional Acupuncture & Moxibustion approaches mental or physical sufferings of participants using oriental medicine like Yoga or other bodywork.

Recently, Dr. Miyamura, who works at Ohtsuchi hospital of Iwate prefecture from April, 2012, has participated in this lecture. He moved from his hometown, Nagasaki, to support disaster victims pushed by his passion to do so. He is a docter of psychosomatic medicine that highlights connection between mind and body. In addition, he is a Buddhist monk who had trained himself for long time.

Dr. Miyamura explains about mind in this lecture as follows;

If people ask us where the mind (kokoro) is, we would say it is in brain. But we cannot find the mind in the brain technically even if we cut the brain. The mind is nature of brain itself. Then, how will the mind perform in the brain? In the core of a brain, there is a part responsible for “consciousness” which sustains life and control athletic ability. In the outer side of the core, there is another part responsible for “emotion” which sustains sense of feelings which every mammal has. And in the most outer side of the brain, there is other part responsible for “intelligence” which just human being has. In our sedentary lifestyle, it could be said that the part of “intelligence” works continually on one hand, on the other hand, the part of “consciousness” could not often work. Because the mind is nature of brain itself, the movement of “consciousness” which we don’t often stimulate negatively influences the part of “emotion” and your mind, as a result of lack of physical activity. If we look at how the brain works, we can understand that the body is closely connected to one’s mental health.

Under the conditions that people are not relaxed, although we understand the importance of sports for our health, we are reluctant to do exercise. However, when we do light exercise with participants in the lecture, part of their “consciousness” becomes activated, leading an effect on “emotion” of feeling good, and “intelligence” generates motivation of ‘I should try it’ as a result. In the course of such brain responses, participants get to show good on their face, leaving a sense of tiredness behind. During the lecture, we can see the participants become relaxed at the end. Even a participant who made an emotional appeal that her legs and hands are always cold became smiling with sweat after a couple of physical activities.

We wish to continue such activities that create the place to share one’s concerns with each other for them to have ways to overcome their hardships by themselves.