TOPNEWSACTIVITYReport 21 on Medical Activities on the ground

Report 21 on Medical Activities on the ground 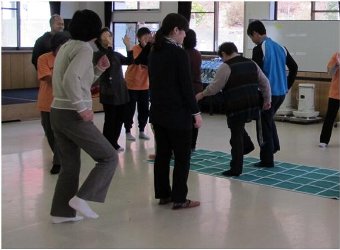 The Physical Fitness Research Institute of the Meiji Yasuda Life Foundation of Health and Welfare participated as an exercise team in the “Kokoro-no care activities” (where the team collaborated with a medical team) held by Médecins du Monde in Otsuchi. As an exercise team, we aim to promote communication among the residents as well as mind and body health through exercise.

Although it has been known for some time past that exercise can lead to a sound mind as well, it seems that there is an unexpectedly low number of people who have realized and utilized positive mood changes through body movement. In our activities, the top priority was to support residents to experience the effects of exercise, while they learn how to become healthy on their own (Details can be found in the previous report 17).

The exercise team activities, started in November of 2011, have become regular with the cooperation of the Otsuchi Council for Social Welfare to hold mainly exercise lessons at the community spaces located in the temporary housing and so on. There are 48 temporary housing locations throughout the town, thus we weren’t able to go to the same facility many times. However, we do feel that we were able to have many people realize the effects of exercise on their mind and body.

The content of the activities was always created through trial and error. We had tried to get participants feel relaxed using a variety of, such as yoga and exercise balls, or step exercise that its steps get harder little by little each time. In so doing, we hoped that the participants will discover exercises that work for them.

We had more exercise experts came to participate from even far places from Otsuchi. And more, exercise instructors who are working locally joined our activities, leading to steadily spread our activities. As a result, in October of 2012 nearly after a year from the beginning, we managed to provide training for the locally-employed supporters who look after the elderly and those who live in the temporary housing through various activities. We feel that this happened because the effects of exercise on the mind and body were made evident for the community supporters whose original approach differed from exercise.

The training was designed and implemented based on the needs of those have already contributed to the activities for the residents so that they are able to utilize exercise in them. There were also seminars held for the community volunteers who have made exercise promotion in Otsuchi through regular exercise classes with a focus on care prevention (due to aging) for the residents. We emphasized in the seminar that not only concrete exercise methods, but also the fact that exercise can be useful to improve mental health states as well as effective as a communication tool. At the start of April, half a year after the seminars, when participating in the exercise class run by the volunteer staff, we saw them utilizing relaxation and step exercise techniques with the participants. It appears the volunteers learned by themselves to give exercise classes for the residents, and it was impressive that the equipment we lent was so well used. We received enthusiastic questions from the volunteer staff to check how to instruct body movements even after the class finished.

We think that the exercise team’s regular activities were shown to have become solidified to a certain extent, and from here, we hope that the people who received our messages will carry on activities to create places for exercise in their own style, leading to their community restoration.

In addition, we heard that the community supporters who manage the community spaces hold stretching with radio (radio taisou) at the temporary housing areas. Although it is just one location, we went to have a look at their radio exercise. According to one of the community supporters, apparently the participants feel that even just moving the body slightly makes their mood improved. The residents, while shouldering difficulties in many aspects of their life, were able to feel that they made solid progress, utilizing exercise to build up the community and more. In the future, we would like to maintain long and close relationships so that we can help whenever necessary, while we pray that all the people affected by the disaster may live healthy and happily.

The number of people who participated in the exercise classes
◆Nov. 2011 to Apr. 2013: More than 800 residents etc. (Including the 48 classes held with the Otsuchi Council for Social Welfare)

◆Over 400 co-hosts and other supporters (including the 13 trainings for local supporters, etc.) (Visited Otsuchi once to twice per month, 4 – 6 classes/trainings while staying for 2-3 days each time)

The Physical Fitness Research Institute of the Meiji Yasuda Life Foundation of Health and Welfare is a research body that helps to make exercise useful for mental health.

Examples of the exercise to relax the body and mind.