While the ASEAN (Association of Southeast Asian Nations) annual summit and the East Asia Summit (which gathers 16 countries, among which the United States, Japan, China, Russia, Australia, India and the 10 ASEAN countries) have just ended in Manila, Médecins du Monde– Doctors of the World laments that the Rohingya issue was neither on the agenda nor in the final declarations, although it affects the most persecuted minority in the world.

“After that the ASEAN took a stance in late September blaming publicly violence in Burma, we were expecting a regional position‐taking regarding the Rohingya crisis. The summit could have been an opportunity to reiterate this denunciation, but unfortunately it came to an end without mentioning the Rohingya, who are victims in Burma of a real ethnic cleansing, according to the United Nations”, declared Gaël Austin, President of Médecins du Monde Japan.

Although it is based on the non‐interference principle regarding its members’ home affairs, in order to avoid lobbying Burma, the ASEAN has a key role to play at a regional level in this crisis resolution.
“Faced with this situation, we, humanitarian stakeholders, cannot accept this silence. The world can no longer be an observer of the unspeakable horrors suffered by the Rohingya people that remained in Burma and by the hundreds of thousands of refugees in Bangladesh or in the surrounding countries”,carries on Dr. Françoise Sivignon, President of Médecins du Monde France. 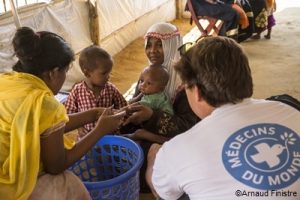 Médecins du Monde, which supports local partners in Bangladesh to give medical aid to these populations, denounced several times the lack of response among the international community concerning this crisis, which is exceptional in terms of scope, violence and complexity. Thousands of people died. 850,000 people fled the nightmare and thousands carry on fleeing whereas there is a terrible lack of targeted sanctions.

The Rohingya people had no nationality; now they have no land, no shelter, and the abuses they are suffering are not recognized.
“We were expecting a strong involvement from the ASEAN regional stakeholders regarding this crisis resolution, and concrete commitments to assist, protect and recognize the Rohingya’s fundamental rights. Through this oppressive silence, the international community, including the ASEAN countries, are participating to trivialize the unbearable. Not doing anything is not an option in one of the largest current humanitarian crisis”and Gael Austin and Dr. Françoise Sivignon.