Three men, one of them is called Maji and he is like a district leader. As we were exchanging about the fact that Rohingya people had been deprived of their identity, their calm and gentle expression changed completely and they started to get very talkative and everyone was talking at the same time. About half a month after listening to their story, there was a demonstration claiming to put the name Rohingya on the ID issued for the camp. “Rohingya people” The name is now denied by both Bangladesh and the international community, demonstrations are manifestations of their anger. 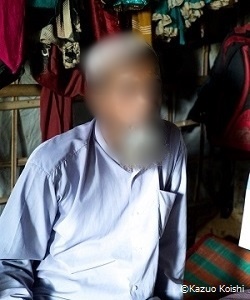 I am grateful to the government of Bangladesh. Nobody was there to help those who helped me when I first arrived here. Now organisations such as INGOs are helping too and support services are available. I am really grateful for that. Now I am able to live peacefully without risk of being killed.

But, I’m worried about being forced to return home. If human rights and safety are guaranteed, we would like to tell the international community that we are going to return. 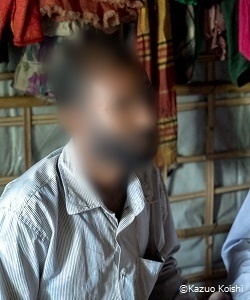 First of all, I would like to thank Bangladeshi people and their government for their hospitality. They allowed us to live here. However conditions are very rough, if I could return to my original life, I would like to return to Myanmar immediately. Here, we get rice, beans and oil distribution and I think it is undoubtedly appreciated. But what about fish and meat? I cannot buy it because I have no job or money. In the past, a clinic was nearby, but it disappeared without notice. It is quite troublesome not to be able to receive any medical care but it is not our only issue. There are also no school. Children cannot receive education either. I want to return to Myanmar, we should be given legitimate citizenship, like the people of Bangladesh, I would like to be able to live in Myanmar with a legitimate status.

May I tell you something? You are Japanese, so you should know that Japan and the UK fought in Myanmar during the Second World War. It was a war between Buddhists and Muslims. After that, the Myanmar government has acted brutally against Muslims, stole our land, deprived us of our citizenship and attempted to exterminate our ethnic group. I believe that Japan has the power to solve this problem and I want the Japanese government to encourage the government of Myanmar to secure the human rights of Rohingya people. The promise to grant civic rights here without granting citizenship rights and returning to Myanmar is obviously unfair and unreasonable. 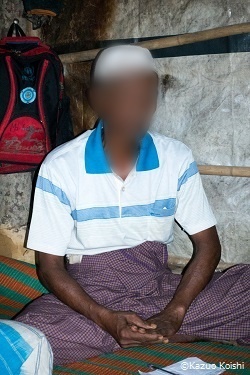 I would like to thank Bangladesh for supporting us and allowing us to live here. I appreciate the support, but the longer I live here, the harder it is to live. Especially because of lack of food, every day the same, only rice is distributed. As you can see, there are lots of children all around here. In addition, there is no school. Children need to learn Burmese for when we return to Myanmar someday. We need a hospital. There are no facilities that can treat diseases of women and children.

As for the return, one can only feel anxious. In Myanmar, there is neither a guarantee of safety nor a system to monitor. The return will be realized for the first time under the guarantee of security and citizenship, a process with dignity. Indeed, everyone is afraid that they will be housed in IDP camps and facilities and killed when returning.
The Bangladesh government and the United Nations are trying to issue smart cards as IDs, but there is no indication of Rohingya status anywhere on these IDs. There is no mention of safety and dignity in the agreement on the return, in these conditions there is no way we can agree. The government of Myanmar should ensure in writing, the recognition of our Rohingya status and our human rights. Rohingya exist, it was recognized properly as a nation in past documents. There is proof, we can show you. Myanmar government destroyed our lives, but we are now here.