To bring healthy bodies and minds to all children in Laos toward a brighter future
-We have launched the second-stage project to reinforce the foundation of Lao Child Healthcare Program, in efforts to reduce the mortality rate of children under 5 years old.


Despite its economy on a growing track for the last few years, the Lao PDR is still ranked in the group of developing countries, which is largely due to the widening disparity of social benefits between urban and rural areas. To tackle with the regional gaps of healthcare services, the Ministry of Health introduced the Universal Health Coverage (UHC: universal access to health-promotion programs, preventive and/or curative cares, and functional recovery supports, at an affordable cost for everybody). The state budget, however, is far from enough to ensure the coverage for all, and has no other choice but to depend on foreign aid.

HDI is a metric to assess the social and economic development levels of countries. It measures the average achievements of a nation based on three basic dimensions: health (life expectancy), education (schooling), and income (GNI per capita).


Density of physicians: 1.8 physicians (per 10,000 population)
Source: WHO Statistics


The child mortality rate in Laos is way beyond the world average. In comparison with Japan’s ratio of physicians (23 per 10,000 population), it is pretty obvious that the medical environment in Laos is far below the global standard.
Lao PDR is a landlocked country with its land dominantly mountainous, and this geographical setting is a main factor undermining accessibility of healthcare facilities, sometimes forcing patients to give up necessary medical treatments. Not only because of the geographical hurdle, but also because other disturbing factors exist, such as, heavy financial burden and lack of affordability, poor quality of skills as well as poor experience of the care-workers who too often have a low level of consciousness on health and sanitation. All of these factors have led to limited access to healthcare services, and as a consequence a large number of young children are dying of preventable or curable disease such as diarrhea or pneumonia.


For three and half years from 2012, Médecins du Monde (MdM) committed to assist efforts made in Champassak Province (Southern Laos), providing technical support to pediatric healthcare, promoting rural health-awareness campaigns, and helping the implementation of Free Medical Expense Policy. MdM’s commitment has been effective improving accessibility, encouraging medical check-ups for young children, and contributing to the awareness-raising activity. It has now developed to a self-sustained activity thanks to the joint operation with the Provincial Health Authorities and the rural volunteer group of Health Promotion Campaign. 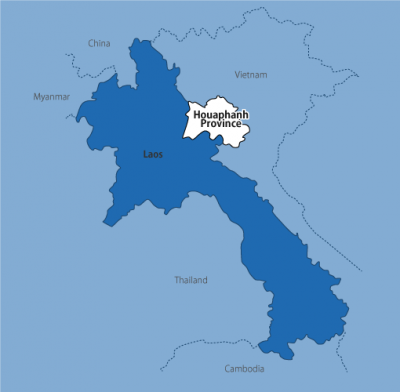 The poverty rate of Houaphanh Province (where the new project is taking place) is of 37%, much higher than the national average of 24.8%. Under-five children’s mortality rate is 118 (deaths) per 1,000 live births, well above the national average. And above all, poverty rates of Xon District (42.8%) and Huameuang District (45%) are shattering…
80% of rural areas of both Xon and Huameuang districts are in remote locations with urgent needs for community health services. However, the findings of Médecins du Monde’s health care survey in 2016 have shown that no such service has ever been provided due to the lack of trained health personnel.
Mid-2016, Houaphanh Provincial Health Department introduced a Subsidy Program in order to reduce or exempt hospitalization costs for children under five. Along with the introduction of UHC (Universal Health Coverage) in 2017, outpatient’s consultation fees have been also subsidized at public expense, and as a result users of medical or healthcare facilities are expected to increase. On the other hand, health workers as well as caregivers are more aware of their lack of skills and knowledge that entrust their profession.


TO BRING SUSTAINABLE HEALTHCARE
SERVICE FOR ALL CHILDREN IN LAO PDR


Given the circumstances, as stated above, Médecins du Monde (MdM) has implemented a new project in Xon and Huameuang Districts, Houaphanh Province.
-To improve clinical skills and healthcare quality for children under 5 years old, through pediatric training, seminars for community hospital staff and healthcare workers, and also through strengthening clinical and technical expertise of medical supervisors who are active in the field.
-To keep villagers informed about pediatric healthcare, through the training of healthcare education staff.
-To provide essential medical supplies, and materials needed to protect good health of children living in remote locations.

It is our belief that protecting children’s health equals developing human resources capable of playing a leading role in Lao PDR and sustaining prosperity for the future of this country.